Once upon a time via Montenapoleone 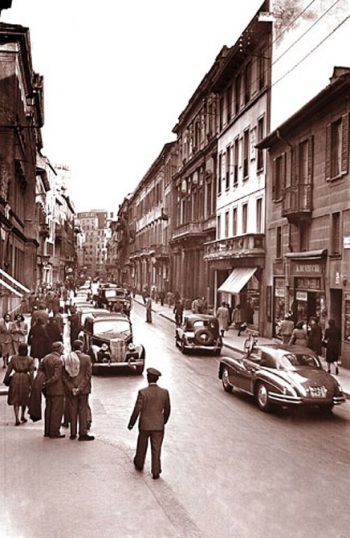 Once upon a time via Montenapoleone

Between convents and vegetable gardens of the aristocrats, already in the nineteenth century was the scene of vanity and luxury.

The last, in order of time, was the Swatch brand, which has chosen the ‘living room’ to inaugurate the Milan flagship store at number 25. Via Montenapoleone, ‘home’ of luxury and fashion, has a long history that the many tourists that flock here in search of luxuries and signatures of high fashion even imagine.

GARDENS INSTEAD OF CONVENTS

So much that in the 50th Peter Van Wood decided to dedicate it a song ‘meeting the ladies, of the elite of the town”. But more than two centuries earlier, in the 700th the road was called Contrada Sant’Andrea and its route that followed the ancient Roman walls it was a kind of urban boundary. At the end of the century and the beginning of 800th, the aristocrats, together with the clergy who accounted for 9% of the city population but were masters of two-thirds of the land in Milan, invaded the territory ‘expelling‘ cloisters and monasteries and by engulfing the cloistered nuns as vegetable gardens.

A CATWALK OF FASHION

The bases of Via Montenapoleone as artery and ‘magnet’ of global luxury rely just around the nineteenth century, when the road was already a Tetaro of vanity almost like a catwalk where the most important names from around the world have found shelter. Beginning with Biki, nickname of Elvira Leonardi Bouyeure the granddaughter of Giacomo Puccini, great lady and stylist of the immense Maria Callas. Not far from the windows of Salvatore Ferragamo, the shoemaker of the stars as Greta Garbo and Audrey Hepburn.

FROM COVA AT THE PARINI’S GROCERY

Not to mention antique dealers and jewelers of international fame as Annibale Cusi, with its jewelry became the official supplier of the Royal Casa Savoia, the jewelers Buccellati, Faraone and Pederzani and the Lorenzi’s cutlery, opened in 1929 that is now gone and that has left ‘widowers‘ many collectors. Much has changed and remained a few ‘survivors‘ including Larusmiani, whose eponymous association brings together 120 luxury brands, hotels and property owners. Then there are the Fedeli Store, the historic Cova’s pastry, the Parini’s groceries while Il Salumaio emigrated in the near Palazzo Bagatti Valsecchi. Now the big dominates are the boutiques: Armani, Louis Vuitton, Versace, Roberto Cavalli, a mecca for tourists from around the world.

THE KEY WORD IT IS EXCLUSIVITY

What makes Via Montenapoleone unique is the exclusivity, because many famous brands sell items unavailable elsewhere at crazy prices to a narrow circle of customers. They privileges quality over quantity. With much attention to accessories. One example is the opening of genuine jewelers / watches as Jaeger–Le-Coultre, Omega, Panerai and Vhernier. All very far from the old monasteries of the Middle Ages